"For this problem," I said, "we have an elephant gun." The students begin writing this down in their notes. "And from this elephant gun, we're going to shoot an African elephant."

The students stop writing and look at it me. "What do you mean, from the elephant gun?"

"Well, you know," I reply, trying not to smile. "It's like a nerf gun. Or a marshmallow gun. A nerf gun doesn't shoot at  nerfs - it launches them. A marshmallow gun launches marshmallows. An elephant gun... [here I draw a picture on the board] ...launches elephants." 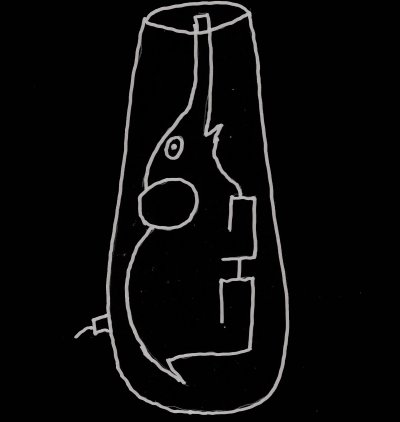 "That's not what an elephant gun is," someone protests.

"It's what my elephant gun is," I reply. Because I've managed to stay so serious while saying all of this, a couple of my students are laughing hard enough that they're almost crying.

Success. This is what I love - to come up with such absurd problems that my students can't help but enjoy working through the details to find out what's going to happen. Along the way we get such comments as, "How big is this gun going to have to be?" and "You're going to have animal rights organizations after you for this!"

If an elephant gun launches an African elephant vertically to a height of 200 feet, how high would it launch your physics teacher?

Once you've decided on the information above, solving the problem involves the following:

This problem can take awhile to work through in class, but it's a lot of fun, and gives students practice in reasoning through how one phase of a problem can affect the next one.