Do you have a question you would like to ask Professor Puzzler? Click here to ask your question!
Rick Lax State Video - How does he do it?
Posted by Professor Puzzler on March 22, 2016
Tags: puzzles

Hi, there's a video going around in which a guy (Rick Lax) asks you to pick a state, and then he guesses what it is. I don't know how he does it. Kara 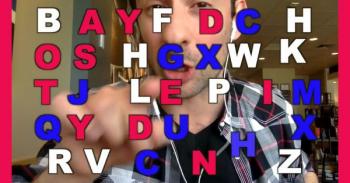 Well Kara, first of all, he doesn't do it. At no point in the video does he guess your state. He's a magician, and his goal is to do some misdirection, and if he fooled you into thinking he did guess your state, then he succeeded in his misdirection. Let me talk you though what he did, and then I'll talk you through how he did it (and by the way, don't expect that we're going to make a habit of doing "spoil the magician's trick" posts - this is a unique case).

First, he tells you to pick a state.

Next, he subtly steers you away from two states by using them as examples. If you picked Utah or New York as your state, when he started using those two as examples, you probably said, "Oh, I better pick something different." Ironically, if you'd stayed with your original pick, he would have gotten it wrong.

Next he tells you to take note of your state name, and the last letter in the name. Here's where he uses the examples of Utah and New York, with one being "H" and the other being "K." At this point he instructs you to "lock in" your guess by clicking "Like."

And this, right here, is the one thing about Rick Lax videos that I detest. This is painfully blatant like-baiting. All of his videos seem to have some degree of like-baiting, but this one is just obnoxious. Rick, if you ever read this post, please stop doing stuff like this. Your videos are fun, and people will share them without you doing like-baiting.

After you've rebelled against being told to "like" the video, and sat there sullenly waiting for him to continue, eventually he puts a bunch of letters on the screen (as shown above) and asks you to find your letter. After he gives you a few seconds, he tells you that your letter is RED.

All of which are red. In other words, there are only three states you can pick which don't end with a red letter.

Why didn't he just make the H, K, and G red? Maybe because that would be too much red (as it is, he stuffed the whites and blues by including the letter H three times). Maybe because he figured that getting it right 47 out of 50 times is more impressive than being right all the time. After all, if he's right 100% of the time, people might try harder to figure out the trick, but if he's not 100% correct, people will think he's just an amazing guesser.

I don't normally "spoil" magicians' tricks on my blog, but the like-baiting means that this video will keep showing up on people's news feeds not because it's so good, but because they get "pushed" into liking it. Really, Rick. Seriously. The like-baiting and share-baiting makes you look pathetic, and you're really not - you're better than that! One of the best comments I saw on your video was: "You'd make a great used-car salesman." Really. That's not how you want to be seen!

P.S. - He's got some videos that have some fun number theory in them, and I'd like to do posts on them, just because I love number theory, but I hate spoiling the fun!