James Herriot wrote many wonderful animal stories for children, from his perspective as a veterinarian. While Herriot is present in his stories as the narrator, the focus is on his clients and their relationships with their unique pets and farm animals. One of my all-time favorites of his is The Christmas Day Kitten. It portrays both sadness at the death of an animal friend, as well as the joy of the new life of a unique and playful little kitten (I've also discovered that this may not be the best book to read while pregnant and feeling more emotional than usual!).

As in Herriot's other stories, Ruth Brown's warm, realistic illustrations capture each scene and feeling perfectly. The text is a bit wordier than some picture books, so it might not hold the attention of very young children. While this story doesn't really get into the practical aspects of celebrating Christmas, it's still a sweet glimpse of the hope of life springing from sadness.

Scrounged From: My parents' house

Probably most of us grew up with Dr. Seuss's The Cat in the Hat, in which we meet a very bold and unique animal, though still cat-like as far as wreaking havoc and making a big mess goes. Whatever your opinion of that one now, here are five more picture books in which felines feature prominently.

1. This Caldecott Honor book by Brendan Wenzel is deceptively simple in its portrayal of a cat as it "walks through the world." They All Saw a Cat is a visual depiction of the way the cat appears to numerous different animals. When the goldfish sees the cat, it's blurry and bug-eyed as reflected through its tank glass. When the mouse sees a cat, it's a terrifying animals with an emphasis on teeth and claws. For the flea it's a forest of hair, while the bat and the worm "see" it in ways even more unique. This is a lovely introduction to the idea of multiple perspectives. 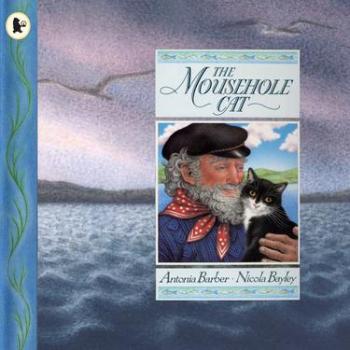 2. The Mousehole Cat (written by Antonia Barber) is a charming story about a brave English cat named Mowzer whose "pet" is a fisherman named Tom. When a long storm rages against their harbor, Mowzer envisions it as The Great Storm-Cat, and decides to see if she can help Tom calm it. This story is probably too wordy for preschoolers -- see my full review here.

3. English veterinarian James Herriot wrote many wonderful stories for children, brimming with warmth, wonder, and respect for animals' individuality. Oscar, Cat-About-Town is one such story of a unique cat who has a strong desire to always be in the middle of the action, wherever it happens to be occurring! Herriot's stories do tend to have some big words in them, so they may be more appropriate for the older end of the picture book age range. For another Herriot story about a unique cat, see Moses the Kitten, or, if you feel like bawling your eyes out, The Christmas Day Kitten.

4. The Tale of Tom Kitten is a classic by Beatrix Potter, and tells the story of three kittens whose mother dresses them all up in clothes, sends them outside, and tells them to behave themselves, which works about as well as dressing up kittens would in the real world. Their mother is a cat too, but she acts more like a human, especially in her unrealistic expectations of kittens. It's so delightfully British when she exclaims "I am affronted!" at the end.

5. The monochromatic illustrations in Kitten's First Full Moon, a Caldecott winner by Kevin Henkes, portray lovely nighttime scenes that illuminate the moon -- which a certain kitten is convinced is actually a big bowl of milk. She spends most of the book trying to figure out how to attain it without success, but manages to have a happy ending anyway. This is a simple, repetitive story that young children would enjoy.

My children found The Mousehole Cat at the library, and I ended up enjoying it more than I expected to. It is a bit too wordy for toddlers, but tells a charming story of a cat named Mowzer who inhabits a small fishing village in England.

Mowzer's "pet," a fisherman named Tom, feeds her all kinds of fish dishes throughout the week, and takes good care of her. But one day, a storm has raged for so long that the village has been without fish and is in desperate need of food, and Tom decides he must go out in his boat and brave The Great Storm-Cat.

The entire story is written from the perspective of Mowzer, who sees the wind as a giant cat paw swiping at the entrance to their harbor. She goes out with Tom in hopes of helping him to calm this powerful cat.

While I had a bit of trouble pronouncing all the names of the different fish dishes, we enjoyed this sweet story, and certainly any cat lover would as well.

Scrounged From: Our local library