Here's an interesting word: cadeau. It's a French word which means "gift". It's interesting because I couldn't find any English words in the form 'CVCVVV'. Not that cadeau has anything to do with this puzzle...you can think of that as a "freebie"...a gift.

Then there's ectype, cygnet, cystic and outcry, four words which have four consonants in a row. But that's not really fair, because the letter Y is really taking on the job of a vowel in those words.

Which reminds me. Your clue for this page is:

And no, I'm not going to tell you anything else. So don't even bother asking me to email you the answer to this one. Besides, the site's Privacy Policy doesn't say anything about using your email address to send you answers. 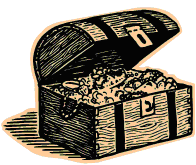