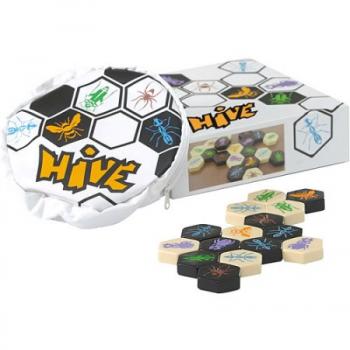 Laura and I were introduced to this game by our friends Nate and Charlene, and quickly decided we needed our own set of Quiddler cards! This is a very fun word game, which is a little bit like Scrabble, in that you're trying to create high scoring words.

How is it different from Scrabble? Well, the obvious answer is that it's a card game instead of a board game. But there are other differences too. Quiddler moves more quickly than Scrabble; the games don't take nearly as long to complete. In Quiddler 'Qu' is not the only letter combination on a tile; there are also combo cards like 'CH' and 'BL', and other commonly used compounds.

As well as getting points for high scoring words, in each round there will be bonus points given for the player with the longest word (even if it isn't the highest scoring), and the most words. So even if someone doesn't have a vocabulary of large, high scoring words, they still can stay in the game by putting out a lot of short words and getting the "most" bonus each round. This means it's fun for a whole family, and the children won't feel like they're totally left out.

Wordy Word is another "Marbles Original" - this game is a great gift for teens and adults, that challenges players to create words, and also to guess their opponents' words!

As you can see from the picture, the game includes five twelve-sided dice, and these dice contain letters of the alphabet. When the timer starts, the players use those letters to create words.

When the players are done creating words they stop their timer, because that's how much time the opposing team has to guess the words they came up with.

Obviously, with the use of timers, this is a fast paced game - more so than many word games!

There are plenty of kids who struggle with mathematics, and - as a result of their struggles - don't think math is much fun. But sometimes all it takes is to just get over a few small hurdles on the road to success...

Educator Peggy Kaye's book contains over 250 pages of resources to help children learn math while having fun. It's a great gift for parents or kids!

One of the great advantages that this game has is that it can be played in three different modes - in other words, it's three separate strategy games in one!

Not only can the board change configuration during play, but the capabilities of the pieces change as well, making this a great game for planning ahead and building strategies.

Three games for the price of one? Doesn't get much better than that!